Hooray! We plan to stage the Kilfenora Traditional Music Festival again on the weekend of 23-24 April 2022. We will adopt a similar format to previous years with events and sessions on the Friday and Monday as well.

This will be the 12th festival in a series that began in 2009 with the centenary of the Kilfenora Céilí Band. The festival is noted for great concerts and céilís, plus cracking CD launches and pub sessions.

We can announce that our main concert act on Saturday 23 April will be the mighty ‘4 Man & a Dog’, who last appeared in Kilfenora 10 years ago. There should be some great supporting artists as well – watch this space. If you want to book your ticket early, contact Noel O’Donoghue on 0878364780. 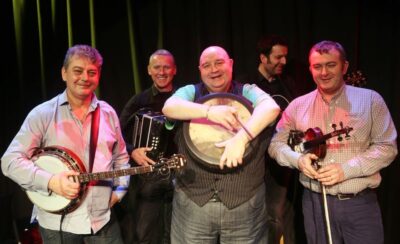 The ever-popular Star of Munster Céilí Band will be leading a céilí later on Saturday night – bring your dancing shoes. And put them on again on Sunday for the traditional open-ait céilí in the Square with the incomparable Kilfenora Céilí Band. There will also be a younger band or two featured.

Obviously the pandemic prevented us from staging the festival in 2020 and 2021. We hope that by April the restrictions we have all faced will have been finally removed. 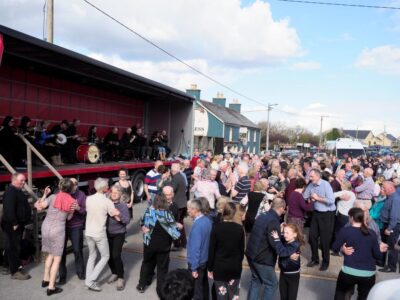 A new biodiversity trail was launched on 21 October at St Fachtnan’s Holy Well in Kilfenora.

This was created by the Kilfenora Tidy Towns team as part of the work it has undertaken on behalf of Kilfenora Development Community Group to improve the village’s appearance during 2021.

This has included improving and creating new flower beds in and around the village; installing planters in Kilfenora Square; weeding pavements; and undertaking clean-ups of approach roads and graveyards. This has involved some great community efforts, including Kilfenora primary school and kindergarten children planting 500 spring bulbs.

The biodiversity trail was created with the help of locally-based horticulturalist Lieke Schonemann of Lieke’s Natural Way.

The Holy Well is less well known than Kilfenora’s Cathedral and crosses, but is a wonderful place to sit and relax just off the main Square. There is ample seating for both the local community and visitors to use.

The improvement works have been aided by grants obtained by Kilfenora Development from Clare County Council and from the Tidy Towns organisation. 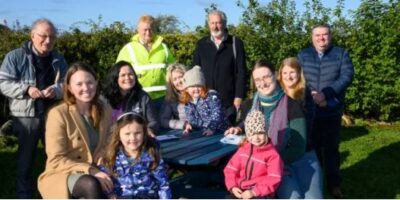 Councillors Joe Garrihy and Joe Killeen have been particularly supportive, along with Regeneration Officer Niamh Wiley, who attended the launch ceremony along with Father Ned and members of the Tidy Towns team, as shown in the photo taken below by Eugene McCafferty on behalf of the Clare Champion.

Numerous objections from villagers were received by the Council, pointing out that this would be by far the tallest structure in the village, located right by houses fronting on Kilfenora Square (including a childrens’ creche) and on the road to Lickeen Lake, and visible from many parts of the village.  Given Kilfenora’s need to welcome visitors to its historic sites, the erection of an eyesore was seen by concerned locals as close to vandalism.

There IS a need for better cellular coverage in the area. However, there were significant doubts expressed about how much this mast would improve services – to the south, being placed in a dip (which is why it has to be so high), it would probably perform poorly, and in other directions might well only beam signal to outer areas rather than the village itself. The location chosen was clearly determined by the fact that this is a site that already has an Eircom installation, itself something of an eyesore – a matter of cost rather than effectiveness.

In terms of visual appearance, Clare Council rejected Eircom’s description of the mast as being akin to a ‘telegraph pole’. The Council recently and experimentally provided a wi-fi service in the Square; it would take little effort or cost to boost and extend this.

Eircom has provided no information on the precise performance of the mast. Indeed, strikingly this ‘communications company’ did not communicate with the residents of Kilfenora at any stage to explain their intentions and the potential benefits. Unsurprisingly, words such as ‘arrogant’ and ‘incompetent’ were among the politer comments to be heard about Eircom in local discussions.

This also seems to fit a pattern of initiatives by various public bodies that seem reluctant to engage with local communities in any meaningful way.

The same unfortunately applies to An Bord Pleanála. The Assessment by Inspector Adrian Ormsby, in rejecting the objections raised and the decision of Clare Council, was also not communicated to or discussed with the Kilfenora community, many of whom might find his various statements of ‘opinion’ to be quite debateable, for example that the mast will not be on a ‘scenic route’. The report indicates that he has not actually visited Kilfenora, and relied on some grainy photos (as below) and drawings.

An Bord Pleanála states that its decision can only be challenged by a ‘judicial review’, which of course would be hugely expensive.

So the situation seems to be that Kilfenora residents are left in the dark about when this installation will be erected, as well as whether it will actually be of any benefit in terms of connectivity.

Note that a previous attempt to erect a mast near Kilfenora some 15 years ago, in a forested area west of Noughaval (in reality less obtrusive than Eircom’s mast), was defeated after extensive public protests. In the course of that battle, a number of untruthful statements by telecoms company O2 were revealed.

The documentation on this case can be seen here.

A brief write-up on this decision was reported on the Clare Champion on 16.8.21, and can be seen here. 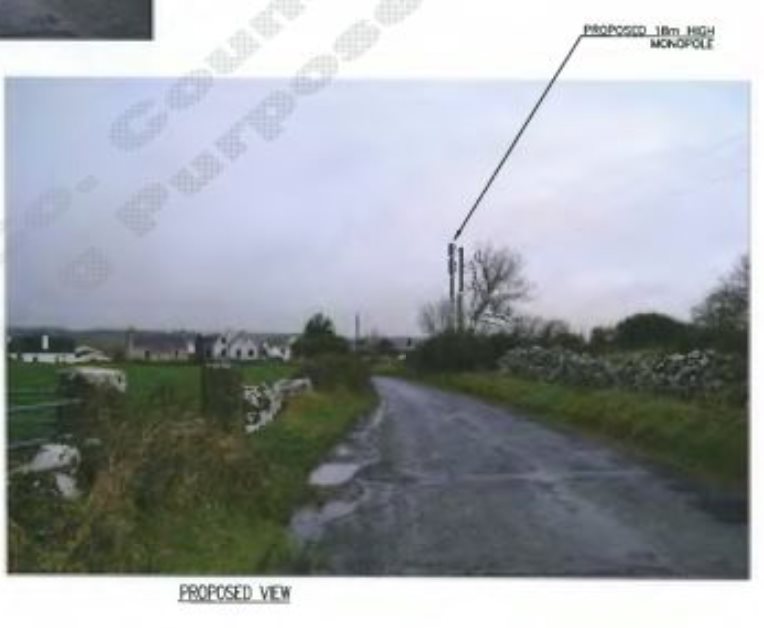 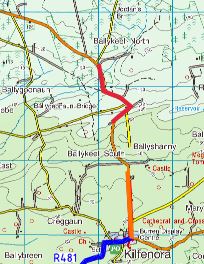 Contractors working for Clare County Council will be carrying out road works in July on the approach to Kilfenora from Lisdoonvarna direction (R476).

From 12th July 2021 to 16th July 2021 between the hours of 8:00 a.m. and 6:00 p.m, re-surfacing  work will start near the junction with the L5290 at Ballykeel North progressing down part of the hill descending towards Kilfenora – see the red section on the map below.

Probably on Wednesday, re-surfacing will also commence on the section of the R476 exiting from Kilfenora (shown in orange on the map), with the intention of concluding by Friday evening.

The Council state that local access will be maintained for residents within the site at all times.

The recommended diversion route for general traffic is to use the N67 (Lisdoonvarna to Ennistymon) and then the R481 towards Kilfenora.

Further details can be found here.

Later still (no date set as yet), 2 kilometres of improvement work is due to be carried out on the L1120 from the turning out of Kilfenora off the R476 (by Fair Green) towards Noughaval.

For the first time in many years, a concerted effort is being made to improve our village’s appearance, and to enter the Tidy Towns competition – for which we need to be ready by 2 July.

The Kilfenora Tidy Towns team is calling on members of the community to help, and is launching an ‘Adopt a Flower Bed’ initiative.

Councillor Joe Garrihy is kindly sponsoring the purchase of plants – thanks Joe! – but community help is needed to weed and prepare 7 flower beds, 4 on the approach road from Ennis/Corofin and three on the Lisdoonvarna Road.

One household has already adopted beds 1 and 2 – see pictures below – but please bidto help with the rest! Call Dena on 087 761 8318 to choose your bed(s) and for any more information.

What’s needed is just weeding and preparing the bed for planting any time before Thursday 24 June (after which the Team will organise planting).  Please take a before-and-after picture of the flower bed you adopted and post that on the Kilfenora Online or Tidy Towns facebook page, or email it to [email protected]

Just so you know, apart from rescuing these flower beds, the intention is to install planters in Kilfenora Square and at Inchovea Church, and put plants in the bed on the Ennistymon approach road. Flower beds are already in place at the West entrance to the Cathedral.

Keep up to date with work being done by Kilfenora Development and the tidy towns team by visiting this website, and on facebook and Instagram (@likfenora_tidy_towns).

A grant of €29,950 has been made by the Department of Housing, Local Government and Heritage for a conservation study of Kilfenora Cathedral. The purpose is to define necessary restoration works, and also to identify ways to develop and widen public access to the Cathedral for heritage, cultural and community use.

This is one of 139 grants totalling €4m announced by Minister Malcolm Noonan, TD on 16 June.

The grant application was made by Rev Kevin O’Brien, with the help of Kilfenora Development and Clare Co Council. The work will be carried out by specialist conservation architects Paul Arnold and Associates.

Kilfenora Cathedral has been closed for use for several years, and has suffered some deterioration internally and externally. It is sad that the fine interior of this important national monument, a community resource for over 830 years, has been shut to visitors and the community. However that should change.

It was recommended to Kilfenora Development and the Church of Ireland that a professional study is a necessary precursor to getting a further grant for the restoration work. 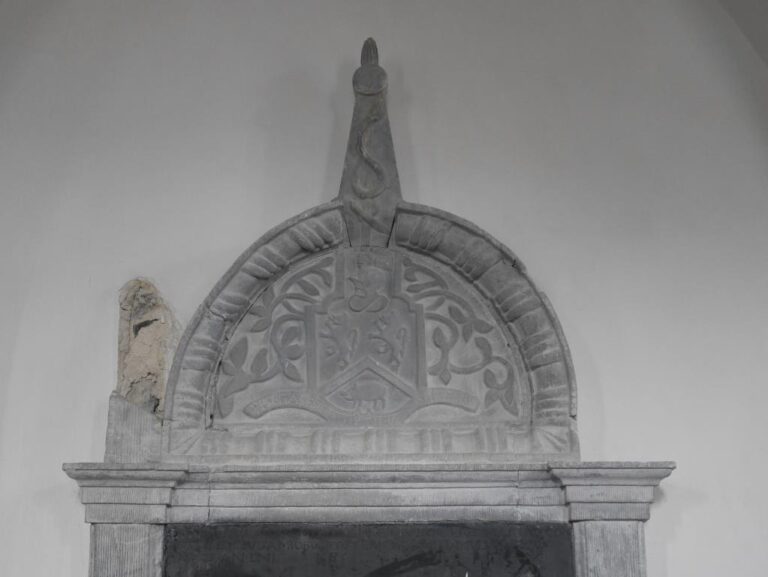 Some of the eroded plasterwork can be seen on the left
In addition the study will examine ways for the Cathedral to be used by the village of Kilfenora, and how enough income can be generated to pay for its upkeep. The intention is to maintain the building as a place of worship, but also to improve its usability for various community and tourism purposes.

Rev Kevin O’Brien is keen for example that It can be used again as a concert venue – as it has been during the Kilfenora Trad Fest – and as a showcase for local talent and young musicians. “In the absence of a local CoI congregation, it is really for the Kilfenora community to embrace this unique building and make best use of it.”

Both to oversee the project and manage the Cathedral in future, a steering group – and eventually perhaps a board of trustees – will need to be formed by the various stakeholders, including our community of course, within the next few months.

In the meantime, the Burren Centre plans to start guided tours of the village for visitors – with the Cathedral, celtic crosses and Holy Well as core attractions – offering a rewarding and relaxed experience for those escaping from the overcrowding at the coast and the Cliffs.

In due course, once repair works have eventually been done, it is hoped that it will be possible to re-open the Cathedral interior on a regular basis.