The Clare County Development Plan sets the priorities and investment plans for many years to come.

The current plan runs from 2023 to 2029, and contains a short section on Kilfenora. (Click the link – we have included the index at the front.)

It is not known locally how the section on Kilfenora was generated, as there is no knowledge of any consultation process.

It indicates an intention to invest in the area, which is welcome. However, the specifics are uncertain – for example what, when and how much.

The plan is open for public consultation until 28 March.

The section is contained in a plan for West Clare which can be accessed here.

The Kilfenora strategy document that has been circulated recently to the community is a potential basis for making an input. If you have views please send them to [email protected]

A draft strategy and plan for Kilfenora is being shared with the community, to help focus improvement efforts in and for the village and surrounding area.

It sets out proposals to improve Kilfenora as a place to live in and work, and as an attractive destination for visitors to come and spend their money. It is a concise document – just 3 pages.

This has been prepared under the auspices of the Kilfenora Development community group, which was formed in December 2020. Clare County Council and Clare Local Development Company (CLDC) had advised that Kilfenora would struggle to get support and grants – indeed little had come Kilfenora’s way for many years, unlike some other locations – unless it created an umbrella organisation to represent the village and its separate various interest groups. Accordingly Kilfenora Development formed a representative steering group – see a reminder about that here.

Some early successes have been achieved – grants have been obtained and a number of discussions held with the Council. A reformed Tidy Towns team has been busy and a sustainable energy group is getting underway – badly needed as energy prices soar. Steps are also being taken to repair and re-open our historic Cathedral.

However Kilfenora was also advised that it needs a strategy and plan as a basis for talking to funders, articulating its needs and projects to take the village forward. The plan also needs to be a basis for collective community action – we have to do things for ourselves and work together if we are to prosper and succeed.

An earlier attempt was made in 2018, supported by CLDC (the Kilfenora Planning Group), but that village plan was never enacted. Yet it contained good ideas, and these have been incorporated in the new document.

Member of the community are asked to respond in three ways, preferably by writing to [email protected]

There will be some brief mention of this at a public meeting on Kilfenora’s future to be held on Tuesday 15 March at 8pm in the Hall – where the Kilfenora community will be briefed on all the developments that have been taking place and those that are being planned and, again, invited to contribute and participate where they can

Jobs are available now to work in the Kilfenora area under the Rural Social Scheme (RSS).

The work entails varied tasks to support the local community – 19.5 hours a week for a minimum payment of €225.

Job applicants should be over 25, involved in farming or fishing, or a family member of someone working in this area. Also, they should be receiving a social welfare payment – see the list in the picture below. 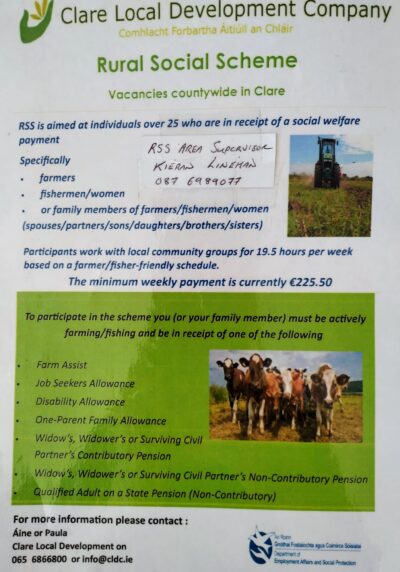 Kilfenora will be featured in a new 7-part TV series entitled ‘Contractors’ which will air on TG4 at 9:30pm on Thursdays.  The Collins family business appears in the programme on Thursday February 24.

Collins Agri specialise in silage, baling, tillage and slurry handling services. The spotlight will in particular be on Eoin Collins, who also works as a secondary school teacher.

The 50-minute programmes provide an insight into contemporary life in rural Ireland. They explore the working lives and personal experiences of agricultural contracting families from diverse locations over the critical six-month period from April to September.

The Burren Centre is starting to gear up for the 2022 season, and is seeking to fill several posts now that normal business conditions are in view.

Manager Claire Collins says “we are looking for enthusiastic and customer-friendly staff, preferably with some relevant experience. But we will provide training, so it’s a good place to build your skills.”

The Burren Centre has been refreshing its menu and decor, and a significant investment in its exhibitions is underway.

Details of all the jobs can be found on the attached PDFs – just click the link.

Here is the new proposal (see map and notes below) from Clare County Council reflecting the input of Kilfenora residents collected in June 2021. If you as a local resident have any further views, send them to Kilfenora Development Community Group by email ([email protected]) or in an envelope at O’Gorman’s shop – by Monday 7 February. 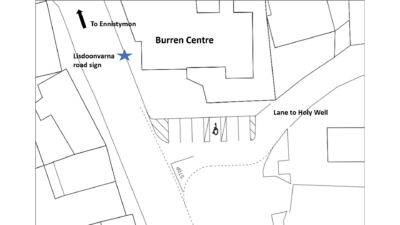 In June 2021, an extensive consultation was undertaken among Kilfenora residents about parking in the Square. Initial suggestions from Clare County Council about parking bays, bus stops and signage were considered, together with suggestions for installing ‘parklets’ and a central island. The great majority elected for keeping things simple and flexible as regards parking bays and installations.

The Council has reflected this in the recently released revised plan, which is very simple and respects three main conclusions from the consultation.

Regarding other community requests from the 2021 consultation, note that bicycle racks were installed in a better location, and Bus Eireann bus stop signs may be provided in future. However, the Council as yet has no plan to install electric car charging points as we requested.