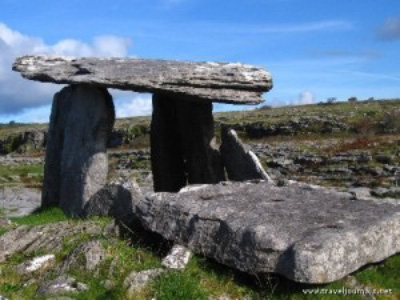 Kilfenora is situated in the ancient barony of Corcomroe on the edge of the Burren. Corcomroe is an Anglicization of Corca-Mo-Ruaidh which means “descendants of the youth with the golden locks”, a reference to a son of Fergus Mac Riogh and Queen Maeve of Connaught. It is thought that Fergus resided at the Doon hill fort (after which was named the Doon reel) above Kilfenora around the beginning of the Christian era.

The entire North Clare area is noted for its inordinate density of prehistoric stone monuments – including tombs dating from 3,000 B.C. built by the earliest settlers.

The best known of these is Poll na Brón (Poulnabrone) dolmen, featured on countless postcards and other artefacts.

Major Iron Age forts in the surrounding area include Ballykinvarga, Tullaha, Doon, Cahercommaun, Caher Mor, Cahermacnaghten and Caherconnell – the latter has its own visitor centre.

More recently (15-1600s) many tower house castles were erected in the vicinity of Kilfenora – the best preserved examples are the ancestral seat of the O’Briens at Leamaneh, and the still intact Ballynagowan Castle at Smithstown .

The name Cillfhionnúrach is generally held to mean ‘the church of the white place’. Both of Kilfenora’s churches are named after St Fachnan, who founded a monastery in the village in 560 AD.

Kilfenora has a cathedral! And the Pope is the bishop!

Kilfenora has a long ecclesiastical history. Its most ancient church was founded by St Fachnan in the 6th Century, and developed into a monastery. This was re-built in 1058 after being burnt down in a destructive raid by Murrough O’Brien in a dispute with his father King Brian Boru over succession rights. The current building dates from 1189, and is deemed to be a ‘cathedral’, as technically Kilfenora continues to claim its historic rights to be a bishopric – it has appointed the Pope in perpetuity as its default bishop! Kilfenora is known as the ‘city of the seven crosses’, some of which are still on show in and around the cathedral.

The Burren area contains a large number of other old churches and ecclesiatical sites, the finest of which is Corcomroe Abbey near Bell Harbour. There are several church sites connected to the Kilfenora parish – at Noughaval, Inchovea and the ruins of Kilcarragh Church on the edge of the village. Also visit nearby Kilnaboy and Kilmacduagh near Gort, which between them have many significant buildings and towers.

Kilfenora has had many ups and downs in its long history. It was known for many centuries as a centre for butter trading – architectural remains relating to this can be seen in Kilfenora and adjacent Noughaval. It suffered raids from marauding armies, such as Red Hugh O’Donnell in 1599 and the Cromwellian General Ludlow who billeted himself at nearby Leamaneh Castle, ancestral seat of the O’Briens and home to the celebrated Maire Rua

In 1841, when Kilfenora’s Post Office was opened, the parish had 4360 inhabitants. The Famine and tough economic conditions reduced this to 1056 by 1900. During WW2, there were over 100 people working in phosphate mines at Noughaval. Some 450 people live in the parish today, with the main local work being agricultural, some light industry, and welcoming visitors!