Tickets are available for the main concert at Kilfenora Trad Festival at Custy’s shop in Ennis, at Linnanes pub in Kilfenora, or online here – just €20. (You can also phone Noel O’Donoghue on 0878364780.) The concert is in Kilfenora Community Hall at 8 pm on Saturday 23 April.

The headliners are the fabulous 4 Men and a Dog – one of Ireland’s premier live acts since they started in 1990, since when they have toured the world, and released 6 CDs. Their musical core is Irish traditional music, but with flavours of Americana and rock n’ roll occasionally blended in. Chock full of instrumental virtuosos, the band is famed for its exciting live performances – both the music and wit are razor-sharp. See below for details of the band members.

Also on the bill is fiddler Simon Crehan from Laffin, Tipperary. He was winner of the inaugural ‘Young Musician Award’ at the Patrick O’Keeffe festival in Castleisland, Kerry in 2021, and won the prize to appear at Kilfenora at Garry Shannon’s Meitheal Summer School. He will be accompanied by his elder brother Patrick on guitar.

The Kilfenora Traditional Music Festival 2022 will be held again on the weekend of 23-24 April.

This will be the 12th festival in a series that began in 2009 with the centenary of the Kilfenora Céilí Band. The festival is noted for great concerts and céilís, CD launches and pub sessions (see list here) from Friday to Monday – with many free events.

Our main concert features the dazzling 4 Men and a Dog, supported by award-winning young fiddler Simon Crehan – get your tickets in good time!. And we will have our traditional open-air entertainment on Sunday in the Square led by the mighty Kilfenora Céilí Band. Here is the daily programme.

Friday 22 April
• Singers night in Linnanes pub (from 9pm), gathering together some of the finest and most humorous singers and storytellers, and hosted by Nóirin Lynch
• Traditional music sessions in Nagles and Vaughans bars

Keep up to date with Festival news on our Facebook page.

Regrettably, due to the Covid-19 Pandemic and related Government restriction on live events, we were not able to stage the annual traditional music festival in Kilfenora in 2020 and 2021. We will do so in 2022.

The festival is normally held on the last weekend of April and features great sessions, concerts, CD launches and more besides. In particular it is famous for the open-air céili with the Kilfenora Céili Band on Sunday afternoon in Kilfenora Square.

On 15 August 2020 we were able to stage on open-air performance and CD launch by the young Clare Céili Band. (https://www.facebook.com/clareceiliband/) We were pleased to welcome Catherine Martin (Minister for Tourism, Culture, Arts, Gaeltacht, Sport and Media.) and her family to this event.

Do check the Festival facebook page for news and updates. 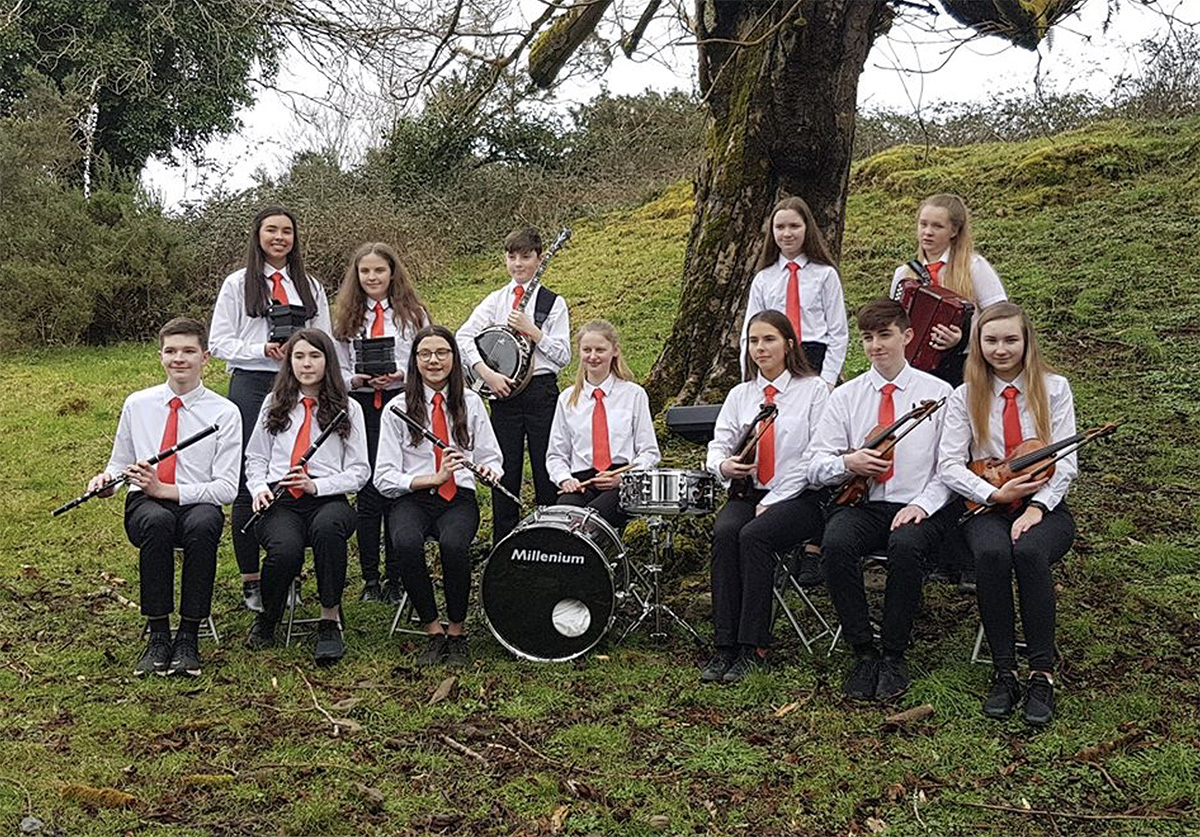 The production was a stunning success. Every night the hall was full over half an hour before curtain up – attendees arriving the customary few minutes before the start time were sadly disappointed! However, given that the production was so popular, the cast agreed to a fourth night’s show on the following Tuesday.

Father Ned Crosby was the producer, as in recent years, ably assisted by a number of local volunteers covering staging, make-up, front-of-house etc.. A short interview with the playwright can be viewed here.

From 26-29 April 2019, Kilfenora staged its 11th annual traditional music festival, a series that commenced in 2009 with the 100th anniversary of the Kilfenora Céilí Band.  With great concerts, céilís, some cracking CD launches and pub sessions, it was a great line-up.

Sessions in Kilfenora’s pubs occured from Friday to Monday, with the cream of musicians from Clare and beyond.

The Singers’ night on Friday evening (Linnanes pub) gathered together some of the finest and most humorous singers and storytellers, hosted by Noirin Lynch.

On Friday evening, Kilfenora Comhaltas also featured an array of talent, young and old, at a Variety Concert in Kilfenora Hall.

Saturday afternoon included 2 special free events. First, at 1pm a ‘Riches of Clare’ event with some of North Clare’s talented musicians (James & Carol Cullinan, Seanie Vaughan, Noel O’Donoghue). Then, at 2.30pm a tribute to the late Tommy Peoples – who was a former member of Kilfenora Ceili Band – hosted by his daughter Siobhan, including a fiddle session (Linnanes Pub).

There were several CD launches at various times over the weekend  – Josephine Marsh (Music in the Frame); Stevie Dunne (Live at the Crosskeys); Peter Casey (Out in the Day).

A Trad for Teens workshop took place on Sunday (c.11.00) in Kilfenora Hall, following a mass with traditional music at St Fachanans Church. And, as in previous years, on Sunday afternoon (3pm), the big event was the great Kilfenora Céilí Band playing for a free céilí in the Square – dancers and spectators welcome. (Their brand new CD “Both Sides Now” was available for sale.) They were preceded at 2.00 pm by the current young Kilfenora Comhaltas Céilí Band.

Check www.kilfenoraclare.com and Kilfenora festival Facebook page for further information about the festival and all the artists appearing.

Visitors to Kilfenora were able to see the much-praised Kilfenora Céilí Band Parlour exhibition space in the Burren Centre, opened formally by Irish President Michael D Higgins in March 2015. This one of very few permanent museums in the world dedicated to a living musical performer or group. It also features the plaque received from the Guinness Book of World Records marking Kilfenora’s achievement in creating the largest traditional Irish Folk Band (at our 2014 festival).

A great day was had by all on St Patrick’s Day in Kilfenora. After Mass, the highlight as always was the parade up Main Street, through the Square and back to Vaughans Yard. ‘Big Tom’ was the prize winner; ‘Children of Lir’ and ‘Big Week on the Farm’ came 2nd & 3rd. Well done to all!

Meanwhile musicians gathered at Kitty Linnane’s graveside in the Cathedral to pay tribute to the long-time leader of the Kilfenora Céilí Band, after which the music moved to Linnanes Pub which hosted a 12 hour session with a procession of great musicians dropping by. And the fun continued in all the pubs til late.